Some Amazing Rock Climbing Spots In The Southern Hemisphere

Are you a fan of abseiling or do you prefer rock climbing? Are you going on holiday any time soon? Fed up with climbing with the masses? Planning a climbing trip in the southern hemisphere perhaps?

You can’t really do an article on just abseiling because nine times out of ten there is good rock climbing in the same region (stands to reason doesn’t it), so here goes for a few interesting places in the southern hemisphere to do both…

You are spoilt for choice in South Africa. There is a huge amount of majestic mountain regions ideal for climbing adventures. How do they grade the climbs in South Africa? They use a simple numerical system:

The best climbing areas in South Africa are Rocklands for bouldering; Oudtshoorn, Montagu, and Milner for sport routes, and Table Mountain and Cederberg for trad routes. Of course, there are loads of others and I have covered just a handful here…

The Restaurant (at the End of the Universe) can be found in the Waterval Boven cliffs in the Mpumalanga Highlands Drakensberg Mountain region – about 3 hours from Johannesburg and Pretoria. This region is one of the top rock climbing destinations in South Africa and is rated highly by many of the best climbers in the world. Most of the good climbing can be done around the difficulty rating of 17-27, with options to climb up to grade 33! Some pretty serious climbing then…

The Oribi Gorge in KwaZulu Natal was created over millions of years as the Umzimkulwana river carved its way over flat rock, finding faults in the stone and eroding enormously deep and narrow gorges. At the base of the cliffs, there are rocks that are 1000 million years old while the cliffs themselves are formed from sandstone deposited about 365 million years ago. Here you can abseil down a 110m mountain or climb one of the many challenging routes on offer. Another interesting abseil is alongside the Howick Falls also in the KwaZulu-Natal Midlands.

view from near Baboon’s Castle

Blouberg Massif is a stone’s throw from both Botswana and Zimbabwe. It is a 1,200ft quartzite mesa that sits in the sun for most of the day and is considered South Africa’s most difficult Big Wall. There are 11 classic routes here, starting at a grade of 19. And there are some terrific names too. A few examples are: Wall of White Light (a big scary wall), Psycho Reptile, White Light, Future Shock, Crack of Adventure, Road to Nowhere, Hey Jude, Bushpig, Tequila Sunrise, Moonshadow, Teddy Bear’s Picnic, and Wow Fuck to name but a few…

Milner Amphitheatre in the Western Cape is a double-tiered orange rock face in the Hex River Mountains. It sits beside a 2,000ft waterfall. This is an area with excellent multi-pitch sport and pitch climbing which makes it some of the best climbing in South Africa. There is sensitive access to this area so it is best to get in touch with a local club of the MCSA to check out the rules and regs.

And of course, there is Table Mountain. How can you talk about climbing in South Africa without bringing the famous and iconic Table Mountain into the discussion? Rock climbing on Table Mountain is a very popular pastime. There are well-documented climbing routes of varying degrees of difficulty up the many faces of the mountain. As the mountain is part of the Cape Floral Region which is a World Heritage Site, no bolting can be done here and only traditional climbing is allowed. Commercial groups also offer abseiling from the upper cable station. The cable car also offers a quick descent! 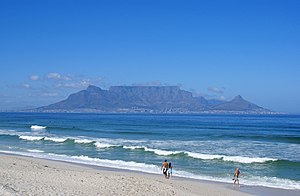 The Giant’s Castle Massif in the Natal Drakensberg offers some pretty technical ice climbing as a variation to rock climbing. These are southern Africa’s highest and most spectacular mountain ranges. It also holds the regions only consistently forming ice and snow routes. Most documented routes are either pure water-ice or pure névé snow, but there are a few routes that require mixed climbing. Giant’s Castle itself is located on the south side of the massif. Ice forms from late May right through to late August. The best time is usually mid to late July. Several major climbs have been done on this peak and numerous others still await first ascents. Most of the unclimbed falls are steep, multi-pitch routes that will require serious skill and determination to conquer.

And before we leave South Africa I just had to include this scary photograph that I have just come across – it gives a good idea of some of the challenging climbs the region has to offer!

And finally for the southern African region, as a keen abseiler, you may well have heard of Maletsunyane Waterfall in Lesotho. It is a precipitous 204m drop down the side of the falls into the gorge, although Wikipedia has its height at 192m. As you can imagine, the view from the top is magnificent. It has the Guinness World Record for the highest commercially run abseil in the world and attracts many an international daredevil. It is abseiling at its best and most exciting.

The Grampians in Melbourne is internationally renowned for its rock climbing and abseiling experiences and has become a popular destination for adventure seekers. It is home to hundreds of exciting climbs, especially on the rugged cliff faces of Mount Stapylton, at the park’s northern end. Local adventure companies offer a variety of climbing and abseiling courses including introductory lessons for the novice and programs covering advanced skills for the experienced.

Climbers from across Australia and around the world test their skills on the sheer rock faces of Mt Arapiles, a stunning peak just west of Horsham that boasts some of the most dramatic and demanding rock formations in Australia. Mt. Arapiles has some equally amusing names: Bard Buttress, ‘Pilot Error’, High Dive, Deliciously Deranged, Life in the Fast Lane, Use No Chooks, Anxiety Direct, Slinkin’ Leopard…

A combination of reliable weather and an extraordinary array of cliffs, pinnacles, and bluffs have made Mt Arapiles the most popular climbing and abseiling destination in Australia. The mountain boasts more than 2,000 designated climbs, ranging from easy ascents for beginners to level 30 climbs, the most extreme ascents. With so many climbs it is hard to give a short list of the absolute best. However some routes do stand out above the rest, Sunny Gully, Bullet Buttress, Tiptoe Ridge, Introductory Route, Exodus, Diapason, Marshmallow Sea, Conifer Crack, and Eskimo Nell to name ten.

And as with the South African section above I came across some stunning photographs and include one here just as a teaser:

Golden Bay is considered the best limestone climbing in the Pacific, near Abel Tasman National Park. Highlights include rock climbing at the well-known Paton’s Rock Reserve and Payne’s Ford. It is one of the best concentrations of single-pitch sport climbing in NZ (there are also a few natural routes). It has the added bonus of an incredibly beautiful landscape.

Like many other crags in New Zealand, Paynes Ford has been well and truly discovered. The crag offers steep, solid limestone, and includes some of the hardest climbs in the country. Simon Middlemass and The Climber magazine editor Mark Watson have brought out a laid-back but definitive guidebook for the region. Almost its opening passage is “For those of you who haven’t been here before we had better warn you now that this is a very dangerous place; a place where time stands still and hippies abound, nude swimming is still accepted and people don’t take life too seriously.” Seems as good a place as any to go climbing, does it not?!

10 Cool Climbs Across The US

How Centre of Gravity Affects Your Rock Climbing Performance

The 15 Best Climbing Movies Ever Made: Your Must-Watch List

The Salathé Wall – The Other Climb on El Capitan

Rock Climbing Essentials – The Basic Equipment You Will Need