Well, not so long ago we did an article on the world’s most extreme waves, so I thought, “what the hell…” – and decided to do some research on the world’s most extreme mountains to climb. I am bound to leave out some and be corrected by you guys out there on others – all comments and feedback will be anticipated with interest! I have intentionally left out Mount Everest so no bleating about that please!

These legendary mountains have attracted adventurers over the centuries. But extreme weather, perilous crevasses and even mystical spirits can turn expeditions into fatal endeavors.

I have split this article into 3: The Himalayas, The South America’s and Europe. So here goes with the first one…

“ Well, George, we’ve knocked the bastard off”
How the laconic Sir Edmund Hillary reported his ascent of Everest to a team mate

K2, also known as Godwin Austin, is considered the world’s toughest mountain to climb, it is also the world’s second highest peak. It is familiarly called “The Savage Mountain” and is arguably the hardest climb in the world. The first ascent was in 1954. It’s routes are steeper and more difficult than those to the top of Everest, and the surrounding weather is significantly colder and less predictable than on Everest. Reaching the top of K2 is the equivalent of an Olympic gold in mountaineering! 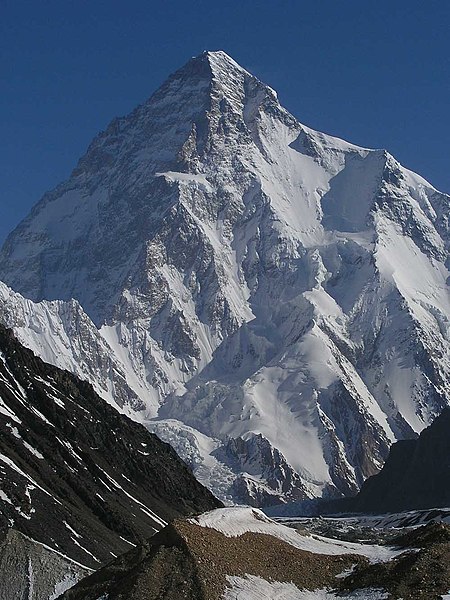 It was first summitted in 1954 by Lino Lacedelli and Achille Compagnoni – 2 Italians. Since then there have been 189 summits compared with approximately 1,400 on Everest (these are 2004 dates and I cannot find anything more up-to-date, even from wisegeek). 49 climbers have died on K2, 22 whilst descending from the summit. In terms of accidents that happen on the descent, it is the most deadly mountain in the world. The statistics for female climbers are particularly dramatic. Some even say K2 is cursed for women. 5 women have reached the top, but out of those 5 – 3 died on the descent and, just as a matter of interest, the other 2 have since died on other 8,000m peaks. In spite of these dangers the mountain continues to lure climbers from around the world. It is the ultimate extreme challenge. In scaling Everest you are a great climber – but in scaling K2 you are a “true climber to other climbers“ .

In 1955 a British expedition under Charles Evans climbed the mountain, but in deference to local religious beliefs the party stopped a few yards short of the summit. Most successful summit parties since then have followed this tradition. Kanchenjunga has 5 summits: Kanchenjunga Main, Kangchenjunga West (Yalung Kang), Kangchenjunga Central (Middle), Kangchenjunga South and Kangbachen. There are no direct routes to any of the summits. Ascending as far as the ice terraces is a relatively normal climb, but the final ascent is an almost vertical pyramid of over a thousand feet, which, at that altitude, is quite a challenge. 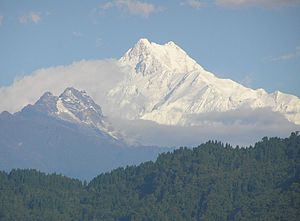 Though not successfully climbed until 1955, it was first attempted in 1905, but the four members of that international party were killed in an avalanche. The threat of avalanches and mudslides is omnipresent in the area, which receives very heavy precipitation throughout much of the year. Over the years, Kanchenjunga has claimed its fair share of lives and was only finally conquered by a woman, Ginette Harrison, in 1998. Until then Kangchenjunga had been the only eight-thousander that had not seen a female ascent.

Nanga Parbat is the world’s ninth highest peak and is considered to be the most dangerous mountain to climb. Known affectionately as the Man Eater or The Killer Mountain, this craggy monster, located in Kashmir, is an enormous ridge of rock and ice. Its southern side features the tallest mountain face on the planet, rising 4,500m (15,000 ft). above its base. Reinhold Messner, a living legend in moutaineering from Italy, says that “everyone who has ever stood at the foot of this face up above the ‘Tap Alpe’, studied it or flown over it, could not help be have been amazed by its sheer size; it has become known as the highest rock and ice wall in the world.”

A lot of mountaineers have perished on the mountain since 1895. Nanga Parbat claimed 31 lives before it was conquered by Austrian Herman Buhl in 1953. It has always been associated with tragedies and tribulations. Even in recent years it has claimed a heavy toll of mountaineers who were in search of adventure and thrill.

Pomiu is a knife edged rock peak in southwestern China. It is part of the Four Girls (Siguniang) Mountains, a beautiful Nature Reserve with many sharp rock peaks, lakes and marshes which had been shaped by ancient glaciers. The highest peak in the region is Four Girls Mountain itself, reaching up to 6250m. . In 1984, Allen Steck and another mountaineer of the AAC member made the first ascent of Pomiu, and in 1985, Keith Brown, an AAC member, made the second ascent with a new route. Mr. Qiu Xiang and Liu Xinan made the ascent of the south west ridge in August 30, 2005. The mountain is very difficult to climb although the region is hoping that with the increase of tourism this might change in the future – not the difficulty of the climb obviously but the amount of moutaineers attempting it!

This beautiful photograph was taken by Kenzo Okawa. If you want to see more of his stunning work I suggest you go to his site at www.summitpost.org Pomiu.

Lhotse is the world’s fourth largest moutain on earth and is connected to Everest via its south col, a vertical ridge that never drops below 8,000m. It is best known for its proximity to Everest and for the fact that climbers ascending the standard route on that peak spend some time on its northwest face. It is often seen as a minor eight-thousander. However, Lhotse is a dramatic peak in its own right, due to its tremendous south face. This rises 3.2 km in only 2.25 km of horizontal distance, making it the steepest face of this size in the world. Lhotse has three summits: Lhotse Main 8516m, Lhotse Shar 8383m and Lhotse Middle or East 8413m. Lhotse Main was first climbed in 1956 by Ernst Reiss and Fritz Luchsinger who were part of a Swiss expedition. Lhotse Shar was first climbed on December 5, 1979 by Sepp Mayerl and Rolf Walter by taking the SE-ridge. It was not until 2001 that Lhotse Middle was conquered by the Russian Expedition.

The south face has been the scene of many failed attempts, some notable fatalities, and very few ascents (one of them, by Tomo Česen, is unverified). As of October 2003, 243 climbers have summitted Lhotse and 11 have died.

Mount Elbrus – where is it?

The North Face of the Eiger, Switzerland

What sort of a mountain is Mount Elbrus to climb?

Europe’s Toughest and Most Challenging Mountains to Climb